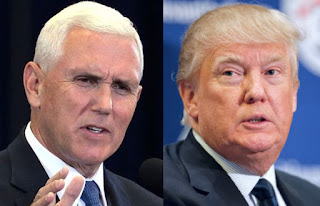 This past week, Mike Pence stopped in Ireland for essentially no reason while on his way to Poland, and made a point of staying in Donald Trump’s hotel in Ireland, just to put some money in Trump’s pocket. It turns out this may not have been a mere attempt at bootlicking on Pence’s part, so much as an attempt at making amends for… we’re not even sure what the story is at this point.

Apparently, Donald Trump and Mike Pence have been feuding behind the scenes for the past year, and the whole thing is basically over nothing – or at least nothing that makes any sense. Trump’s family has supposedly been pushing him to replace Pence on the 2020 ticket, while Trump himself appears to be jealous of the notion that Pence might run for president in 2024, according to a bizarre new report from Yahoo News.

So now we know that the President and Vice President of the United States have spent the past year feuding, instead of focusing on trying to find a way to win in 2020, because the President wants the Vice President to publicly announce that he’s not going to run in 2024. No, really, this is what’s being reported. Here’s the part we can’t figure out.

We all know that Donald Trump has gone completely round the bend. But is he under the delusion that he’s going to somehow magically be given a third term in 2024, and that’s why he wants Mike Pence out of the way? Or is Trump afraid he’s going to lose in 2020, and then Pence is going to run in 2024? Considering that’s Trump’s entire life is falling to pieces, we can’t think of a more delusional thing for him to be obsessed with. Then again, this is guy who just got caught drawing on a hurricane map with a Sharpie so he wouldn’t have to admit he’d made a mistake about where it was headed. (Palmer Report)