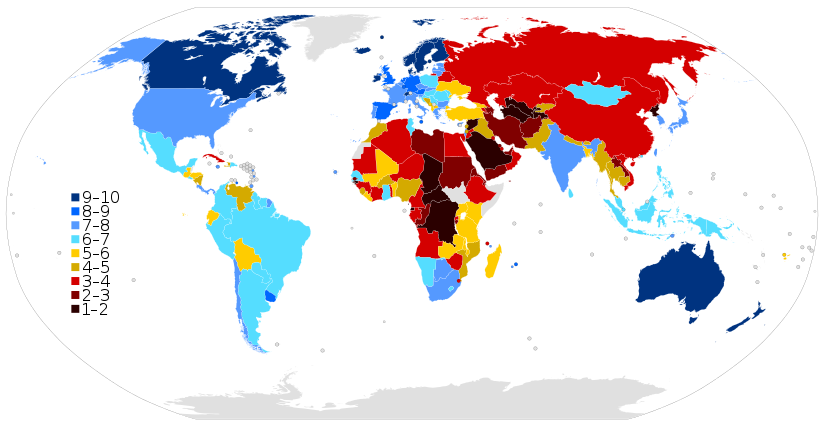 The Economist Intelligence Unit Democracy index map for 2016.[1]
Bluer colors represent more democratic countries.
The Democracy Index is an index compiled by the UK based Economist Intelligence Unit, that measures the state of democracy in 167 countries, of which 166 are sovereign states and 165 are UN member states. The index was first produced for 2006, with updates for 2008, 2010 and the following years since then. The index is based on 60 indicators grouped in five different categories measuring pluralism, civil liberties, and political culture. In addition to a numeric score and a ranking, the index categorizes countries as one of four regime types full democracies, flawed democracies, hybrid regimes and authoritarian regimes.

As described in the report,[2] the democracy index is a weighted average based on the answers of 60 questions, each one with either two or three permitted alternative answers. Most answers are "experts' assessments"; the report does not indicate what kinds of experts, nor their number, nor whether the experts are employees of the Economist Intelligence Unit or independent scholars, nor the nationalities of the experts. Some answers are provided by public-opinion surveys from the respective countries. In the case of countries for which survey results are missing, survey results for similar countries and expert assessments are used in order to fill in gaps.
The questions are distributed in the five categories: electoral process and pluralism, civil liberties, functioning of government, political participation, and political culture. Each answer is translated to a mark, either 0 or 1, or for the three-answer alternative questions, 0.5. With the exceptions mentioned below, the sums are added within each category, multiplied by ten, and divided by the total number of questions within the category. There are a few modifying dependencies, which are explained much more precisely than the main rule procedures. In a few cases, an answer yielding zero for one question voids another question; e.g., if the elections for the national legislature and head of government are not considered free (question 1), then the next question, "Are elections... fair?" is not considered, but automatically marked zero. Likewise, there are a few questions considered so important that a low score on them yields a penalty on the total score sum for their respective categories, namely:
The four category indices, which are listed in the report, are then averaged to find the democracy index for a given country. Finally, the democracy index, rounded to one decimal, decides the regime type classification of the country.
The report discusses other indices of democracy, as defined e.g. by Freedom House, and argues for some of the choices made by the team from the Economist Intelligence Unit. In this comparison, a higher emphasis has been put on the public opinion and attitudes, as measured by surveys, but on the other hand, economic living standard has not been weighted as one criterion of democracy (as seemingly some other investigators[who?] have done).[3][4]
The report is widely cited in the international press as well as in peer reviewed academic journals.[5]

Full democracies are nations where civil liberties and basic political freedoms are not only respected, but also reinforced by a political culture conducive to the thriving of democratic principles. These nations have a valid system of governmental checks and balances, independent judiciary whose decisions are enforced, governments which function adequately, and media which is diverse and independent. These nations have only limited problems in democratic functioning.[6]
Flawed democracies are nations where elections are fair and free and basic civil liberties are honored but may have issues (e.g. media freedom infringement). Nonetheless, these nations have significant faults in other democratic aspects, including underdeveloped political culture, low levels of participation in politics, and issues in the functioning of governance.[6]
Hybrid regimes are nations where consequential irregularities exist in elections regularly preventing them from being fair and free. These nations commonly have governments which apply pressure on political opponents, non independent judiciaries, widespread corruption, harassment and pressure placed on the media, anemic rule of law, and more pronounced faults than flawed democracies in the realms of underdeveloped political culture, low levels of participation in politics, and issues in the functioning of governance.[6]
Authoritarian regimes are nations where political pluralism has vanished or is extremely limited. These nations are often absolute dictatorships, may have some conventional institutions of democracy- but with meager significance, infringements and abuses of civil liberties are commonplace, elections- if they take place- are not fair and free, the media is often state-owned or controlled by groups associated with the ruling regime, the judiciary is not independent, and the presence of omnipresent censorship and suppression of governmental criticism.[6]

According to the issue of the index for 2012, Norway scored a total of 9.93 on a scale from zero to ten, keeping the first-place position it has held since 2010, when it replaced Sweden as the highest-ranked country in the index. North Korea scored the lowest with 1.08, remaining at the bottom in 167th place, the same as in 2010 and 2011.[2]
There was no significant improvement or regression in democracy between 2011 and 2012. In 2012 the index score stayed the same for 73 out of 167 countries, improved for 54 countries, and declined for 40. Libya experienced the biggest increase of any country in its score in 2012. Average regional scores in 2012 were very similar to scores in 2011. An exception is the Middle East and North Africa (MENA) where the average score increased by more than a tenth of a point, from 3.62 to 3.73 and three countries moved from authoritarian to hybrid regimes (Egypt, Libya, Morocco).[2]
The Democracy Index for 2011 highlighted the impact of the Arab Spring and the greater effects it might have, as well as the impact of the global financial crisis in 2007–08 on politics throughout most of Europe. The Democracy Index score was lower in 2011 than in 2010 in 48 countries out of the 167 that are covered. It was higher in 41 ranked countries, and it stayed the same in 78.[7]
In nine countries there was a change in regime type between 2010 and 2011; in four of these there was regression. Russia was downgraded from a hybrid regime to an authoritarian regime, which the report attributes to concerns over the December 4 legislative election and Vladimir Putin's decision to run again in the 2012 presidential election. Portugal was also downgraded to the flawed democracy category, attributed to the effects of the global financial crisis. Tunisia, Mauritania, Egypt, and Niger were all upgraded to hybrid regimes, and Zambia moved up to the flawed democracy category.[7]
In 2016, the United States was downgraded from a full democracy to a flawed democracy. This was partly due to the election of Donald Trump despite him losing the popular vote, but was also a result of a variety of factors ranging from political scandals to decline of public trust in government institutions.[8]

The following table gives the index average by world region, and the number of covered countries in 2016. Note that some regional groups (e.g., the 'Eastern Europe') are very heterogeneous and composed of full democracies as well as authoritarian regimes:

Listing by country is available on the Economist website;[1] for by-country tables in Wikipedia using similar measures, see List of freedom indices.