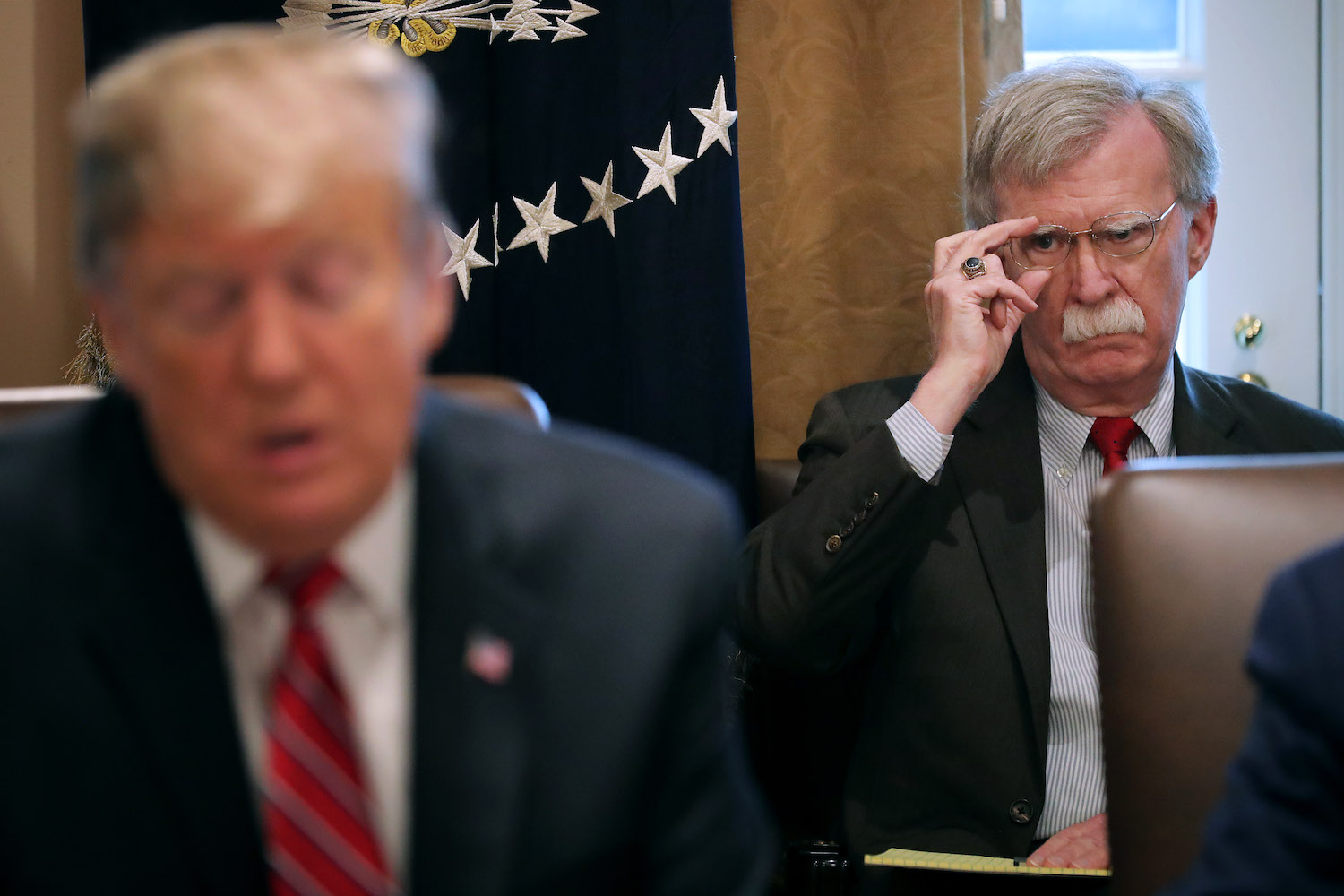 Trump axes Bolton, the hawk he brought to the White House
(Brendan Mcdermid/Reuters)

When President Trump tapped John Bolton to be his third national security adviser in two years, the veteran foreign policy official was already widely seen as a polarizing figure. Opponents to the left loathed the former member of both Bush administrations for his bludgeoning approach to diplomacy abroad and interagency processes at home, his support for numerous invasions and wars, and his hard-line insistence on the primacy of American might on the world stage.

At the time of Bolton’s ascension in April 2018, critics invoked congressional testimony from a decade-and-a-half-old confirmation battle that cast him as a “kiss-up, kick-down sort of guy.” The implication then was that the wily operator could flatter and manipulate Trump while bullying the national security apparatus into enacting his hawkish agenda.

Things didn’t quite work out that way. On Tuesday, with yet another bombshell tweet, Trump announced Bolton’s departure from the top foreign policy post in the White House. A tenure in the White House that lasted barely a year and a half ended not because of Bolton’s enemies outside the administration, but those within.

The move capped months of whispered speculation that Bolton had fallen far out of favor with Trump and that his grip on the job was slipping. A news conference later in the day Tuesday with a grinning Secretary of State Mike Pompeo — who is reportedly “not on speaking terms” with Bolton — and Treasury Secretary Steven Mnuchin illustrated how unperturbed other senior Trump aides seemed to be by the move.

For his part, Bolton texted numerous members of the Beltway media, insisting that, contrary to Trump’s messaging, he had decided to quit before the president could fire him. The drama of his exit made clear the enmity that now lies between him and the president.

Trump framed his decision in political and ideological terms. “I informed John Bolton last night that his services are no longer needed at the White House,” Trump said. “I disagreed strongly with many of his suggestions, as did others in the Administration.”

Bolton ended up at odds with Trump on key foreign policy issues. Trump’s multiple meetings with North Korean leader Kim Jong Un rankled Bolton, who has spent much of his career working to undermine past diplomatic initiatives with Pyongyang. Bolton, a champion of regime change in Tehran, was reportedly “devastated” when Trump decided against ordering a June military attack on Iran in retaliation for its downing of a U.S. drone.

As the White House’s push to dethrone Venezuelan President Nicolás Maduro lost momentum, Trump reportedly blamed Bolton for his overzealous confrontation with the Venezuelan regime. And Bolton clashed with Trump over the president’s now-aborted efforts to forge a peace deal with the Taliban in Afghanistan.

As my colleagues recently reported, when it came to Afghanistan, Bolton and his National Security Council were eventually sidelined by the president’s top aides and kept out of sensitive discussions as the ill-fated talks progressed. Trump resented Bolton’s opposition to his efforts to disentangle the United States from a protracted conflict and suspected his office as a font of leaks to the press.

“It’s messed up on so many levels that the national security adviser isn’t involved, but trust is a real issue,” a senior U.S. official told my colleagues.

The situation left Bolton a diminished figure. In some arenas, he had happily pursued Trump’s “America First” agenda: Bolton launched bureaucratic and diplomatic attacks on various international organizations he viewed as hostile to American interests, from agencies in the United Nations to the International Criminal Court to the World Trade Organization. He stood side-by-side with Trump as the president reneged on American commitments to the Iranian nuclear deal and outraged U.S. allies with a heavy-handed pressure campaign on the Palestinians.

But that was not enough for either him or Trump.

“When it came to unwinding previous U.S. policies Trump viewed as a nuisance, Bolton eagerly executed for the president over the objections of career diplomats and defense officials,” noted my colleague John Hudson. “But the president’s desire to end America’s long-standing military conflicts and strike deals with longtime U.S. adversaries, such as Iran and North Korea, exposed sharp differences between the two men that lingered under the surface.”

Now, the prospect of Trump meeting Iranian President Hassan Rouhani later this month in New York looks far more plausible. Iranian officials, including Foreign Minister Javad Zarif, have repeatedly blamed the Trump administration’s hostile approach to Iran on Bolton — as well as America’s Israeli and gulf Arab allies in the Middle East. With Bolton’s removal, at least one major impediment to possible rapprochement has been removed.

Bolton’s critics argue that his departure couldn’t have come sooner and that his right-wing bellicosity had only succeeded in raising tensions around the world. “I think the threat of war worldwide goes down exponentially with John Bolton out of the White House,” said Sen. Rand Paul (R-Ky.), a prominent conservative opponent of American interventions.

“Bolton is out. Maduro is still there. Iran is ramping up its nuclear program,” tweeted Ben Rhodes, a former Obama administration official. “The Cuban government isn’t going anywhere. China is even more assertive and nationalist. By his own metrics he is a historic failure [because] he implemented Trump’s Fox News foreign policy.”

Not all of Trump’s political opponents were thrilled with the news. “I’m legitimately shaken by the grave instability of American foreign policy today,” tweeted Sen. Chris Murphy (D-Conn.). “I’m no Bolton fan, but the world is coming apart, and the revolving door of U.S. leadership is disappearing America from the world just at the moment where a stable American hand is most needed.”

John Gans, a former Pentagon speechwriter, warned in Foreign Policy that Bolton’s über-hawkishness could lead to his political ruin. “For the national security adviser, the question is whether he can find a way to wield a big stick effectively without getting whacked himself,” Gans observed in June. This week, Trump gave us the answer.
Posted by Oscar Bartoli