I don’t mean to peddle facile national stereotypes. For all its problems, Italy is a serious and sophisticated country, not a comic-opera stage set. Still, Italy entered this pandemic with major disadvantages compared with the United States.

After all, Italy’s bureaucracy isn’t famed for its efficiency, nor are its citizens known for their willingness to follow rules. The nation’s government is deeply in debt, and this debt matters because Italy doesn’t have its own currency; this means that it can’t do what we do, and print lots of money in a crisis.

Unfavorable demography and economic troubles are also major Italian disadvantages. The ratio of seniors to working-age adults is the highest in the Western world. Italy’s growth record is deeply disappointing: Per capita G.D.P. has stagnated for two decades.

When it came to dealing with Covid-19, however, all these Italian disadvantages were outweighed by one huge advantage: Italy wasn’t burdened with America’s disastrous leadership.

After a terrible start, Italy quickly moved to do what was necessary to deal with the coronavirus. It instituted a very severe lockdown, and kept to it. Government aid helped sustain workers and businesses through the lockdown. The safety net had holes in it, but top officials tried to make it work; in a supreme case of non-Trumpism, the prime minister even apologized for delays in aid. 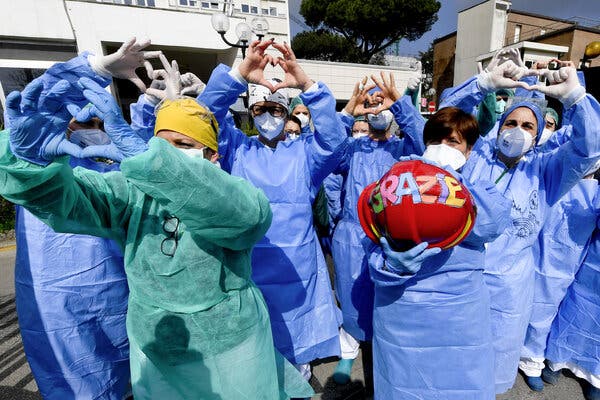 ImageMedical staff at a hospital in Naples showing their appreciation for support from the community.

After a terrible start, Italy did what was necessary to deal with the coronavirus.Credit...Ciro Fusco/EPA,

And, crucially, Italy crushed the curve: It kept the lockdown in place until cases were relatively few, and it was cautious about reopening.

America could have followed the same path. In fact, the Covid-19 trajectory in the Northeast, which was hard-hit in the beginning but took the outbreak seriously, actually does look a lot like Italy’s.

But the Trump administration and its allies pushed for rapid reopening, ignoring warnings from epidemiologists. Because we didn’t do what Italy did, we didn’t crush the curve; quite the opposite. Matters were made worse by pathological opposition to things like wearing masks, the way even obvious precautions became battlegrounds in the culture wars.

So cases and then deaths surged. Even the promised economic payoff from rapid, what-me-worry reopening was a mirage: many states are reimposing partial lockdowns, and there is growing evidence that the jobs recovery is stalling, if not going into reverse.

Incredibly, Trump and his allies seem to have given no thought at all about what to do if the overwhelming view of experts was right, and their gamble on ignoring the coronavirus didn’t pan out. A miraculous boom was Plan A; there was no Plan B.

In particular, tens of millions of workers are about to lose crucial unemployment benefits, and Republicans haven’t even settled on a bad response. On Wednesday Senate Republicans floated the idea of reducing supplemental benefits from $600 a week to just $100, which would spell disaster for many families.

For someone like Trump, all this must be humiliating — or would be if anyone dared tell him about it. After three and a half years of Making America Great Again, we’ve become a pathetic figure on the world stage, a cautionary tale about pride going before a fall.

These days Americans can only envy Italy’s success in weathering the coronavirus, its rapid return to a kind of normalcy that is a distant dream in a nation that used to congratulate itself for its can-do culture. Italy is often referred to as “the sick man of Europe”; what does that make us?
Posted by Oscar Bartoli