Mexico’s Leader Sought Harmony With Trump. He Got a Lopsided Relationship.

Mexico’s Leader Sought Harmony With Trump. He Got a Lopsided Relationship.

President Andrés Manuel López Obrador, visiting the White House Wednesday, has avoided fighting the Trump administration. Critics say he is too willing to bend to the American president’s will. 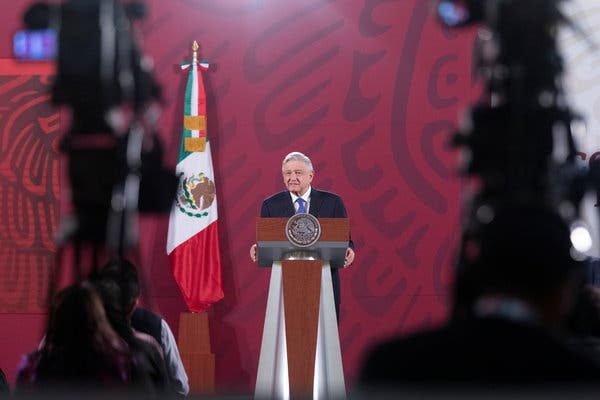 Before heading out for his first state visit to the United States, Andrés Manuel López Obrador, the firebrand president of Mexico known for excoriating his foes in long-winded tirades, made a surprising promise to his people.

He vowed to be strong and not embarrass Mexico on his first trip abroad to meet President Trump, a man seen by many Mexicans as their nation’s chief antagonist.

“I am going to represent you and have no doubt, I will do as you all deserve, with decorum and a lot of dignity,” he said.

It was an exceptional statement for Mr. López Obrador, whose unapologetic manner has been a hallmark since he came to office in 2018 with a landslide and a sweep of both houses of Congress.

But many Mexicans have been angry at his decision to meet with Mr. Trump, especially given Mr. López Obrador’s consistent willingness to bend to the American president’s will — and the possibility Mr. Trump will gleefully remind American voters of that lopsided relationship during the meeting.

Rather than fight Mr. Trump and risk the economic fallout, Mr. López Obrador has repeatedly allowed the United States to dictate major concessions on migration and force Mexico to take on much of the burden of preventing people from crossing the border.

Mr. López Obrador’s visit is officially intended to celebrate the new trade agreement between the United States, Canada and Mexico, which went into effect this month. But the optics for Mexico’s president are even worse because Canada’s prime minister and Trump rival, Justin Trudeau, has decided not to come, citing scheduling conflicts.

The animosity between Mexicans and Mr. Trump runs deep. The American president practically launched his campaign with attacks against Mexico, and he has hardly stopped since then. Some Mexicans fear that he will simply use Mr. López Obrador to bolster his standing ahead of elections in November, while humiliating the nation once more under the pretext of celebrating trade.

And they have good reason to be suspicious. Mr. Trump has bullied and badgered the Mexican government with public threats — including the prospect of broad tariffs or even closing the U.S.-Mexican border. Mexico, aware of the disproportionate impact of a strained relationship on its economy, has largely acquiesced.

For Mr. Trump, the visit offers a welcome distraction from rising coronavirus infections and mass protests over police violence. With its focus on the trade pact, sometimes dubbed NAFTA 2.0, the meeting will allow Mr. Trump to talk instead about an American economy whose restoration he has made a central campaign theme.

Mr. Trump is also likely to raise another defining issue for his campaign: immigration. The president considers progress on a southern border wall and a sharp drop in immigration vital to pleasing his electoral base. Mr. López Obrador, under near-constant pressure from Mr. Trump, has been instrumental in making that drop a reality.

Mr. Trump may also see potential benefit to his standing with Latino voters, 28 percent of whom supported him in 2016 despite his fierce anti-immigration stance. On Thursday, Mr. Trump is scheduled to participate in a round table with Hispanic leaders.

What is less clear is the benefit for Mexico. 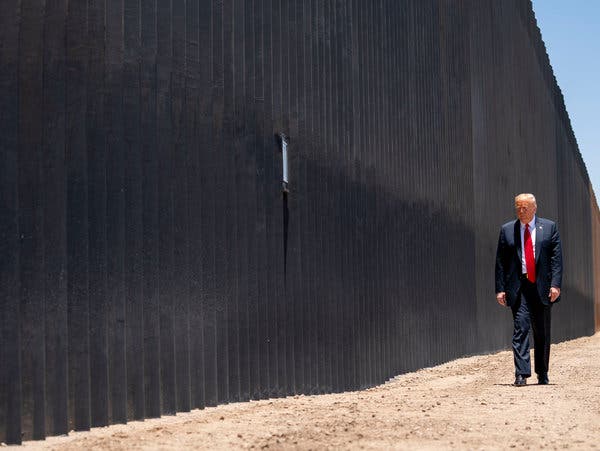 Mexican officials say the reason for the visit is simple. The signing of a new trade deal, especially when its economy is facing the greatest recession in a century, is historic and worthy of recognition, no matter the timing — and even if many analysts expect the deal to have a modest impact on economic growth.

But from nearly his first moment in office, Mr. López Obrador told his team that there would be no fighting with Mr. Trump or the U.S. government. They could not afford costly and bruising battles, and could not win them anyway.

That leverage over Mexico has come to define the relationship, and it has embittered many in Mexico, including people within the government.

With little in the way of recourse, Mr. López Obrador has mostly gone along with the White House agenda, especially on immigration, even though in many cases his actions stand in sharp contrast to his image as a man of the people and a benefactor of the dispossessed.

To placate Mr. Trump’s ire, Mexico has transformed itself into one of the United States’ most powerful tools to halt migration.

The first major shift in policy was Mexico’s acceptance of the Migrant Protection Protocols, a policy that allows the United States to send migrants seeking asylum back to Mexico as they wait out their hearings.

Later, to avoid destructive tariffs threatened by Mr. Trump, Mexico deployed a new security force, the National Guard, to police its borders and prevent migrants from passing into the country. That concession shifted the forces away from the reason they were created — to fight the spiraling violence engulfing the nation.

But although Mr. López Obrador’s concessions helped upend decades of established asylum policy, he paid little price in the polls. His astronomic approval ratings at the time — around 70 percent or higher — barely budged.

Mr. López Obrador has shown a remarkable talent for reading the Mexican electorate and for making choices that, while deeply upsetting to his critics, have done little to dampen his overall public support.

“The average Mexican is only interested in putting food on the table, and so in that sense this visit is the last thing that worries Obrador’s supporters,” Iliana Rodríguez, a professor of international relations at the School of Government at Tec de Monterrey, said of the Trump meeting.

Mr. López Obrador has made clear that his primary focus is domestic. Appeasing Mr. Trump means the American president is less likely to interfere in domestic issues — or to punish Mexico with economic measures like tariffs.

“López Obrador put his money on a strategy of détente, and ironing out tensions with our biggest commercial partner and the world’s most powerful country,” said Jorge Volpi, a novelist and columnist in Mexico.

A food vendor in Mexico City waited for customers. The Mexican economy is facing its greatest recession in a century. Credit...Daniel Berehulak for The New York Times

“As a head of state, that stance was correct,” Mr. Volpi added. “But that didn’t mean that it was the right decision to capitulate to all the pressures and to arrive at the point of humiliation that Mexico and Mexicans have suffered during the Trump presidency.”

Others question the upside of attempting to win favor with Mr. Trump. When Mexico’s previous president invited Mr. Trump to visit during the campaign, it won him few favors from the White House and summoned the wrath of Mexicans of all political stripes.

Similarly, even after pressuring Mexico to accept U.S. asylum seekers within its borders, Mr. Trump still threatened to raise tariffs if the nation did not do more to curb illegal immigration through its territory.

“The notion you somehow hold him off or buy good will by becoming his political pawn — there is nothing to indicate that is true,” said Dan Restrepo, the former national security adviser for Latin America under President Obama.

As his re-election bid nears, Mr. Trump has renewed his focus on cracking down on immigration, primarily across the southern border. Last month, Mr. Trump traveled to virus-gripped Arizona to survey recent construction on the border wall that he has fought bitterly with Congress to fund, with limited results.

He is also expected to make a renewed effort to end a program that protects young immigrants known as “Dreamers” from deportation, after a June Supreme Court ruling struck down his prior attempt to kill the initiative by former President Barack Obama.

A senior Trump administration official on Tuesday said the pandemic would make a traditional state dinner impractical for Mr. López Obrador, so the leaders will instead hold a kind of “state lite” dinner on Wednesday night, along with 20 Mexican and American business leaders from industries including telecommunications, energy and agriculture.

Twelve Democratic members of the Congressional Hispanic Caucus sent a letter to Mr. Trump last week denouncing the meeting with Mexico’s president as an effort to distract from the coronavirus and “a blatant attempt to politicize the important U.S.-Mexico relationship along partisan lines.”

Notably, Mr. López Obrador did not seek to meet with Mr. Biden, the presumptive Democratic nominee. Mr. Gonzalez, who advises Mr. Biden’s campaign, said the former vice president is “aware of the visit” but is not concerned that it will impact the November election.