Tasked with reassuring US, Trump fumbles and fumes 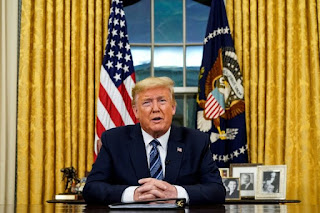 Washington (AFP) - President Donald Trump had one job to do in a primetime address on coronavirus: reassure an anxious nation, a panicking stock market and divided world. Instead, he left many confused and more scared.

Oval Office addresses are an American tradition in times of crisis -- a set piece event reminding the country that the president, heading the world's most powerful office, is there to guide.

Yet Trump's short speech late Wednesday featured a tired-sounding president responding to the global coronavirus pandemic and resulting economic fallout with a mix of bluster, blaming and a jaw-dropping error.

Part of the address sounded like one of Trump's nationalist campaign rallies -- raucous events that the COVID-19 pandemic, incidentally, may now end.

"The virus will not have a chance against us," Trump claimed, echoing his stump speech lines about "killing terrorists" and forcing the world to "respect us again."

And when the president rolled out his plans for stopping coronavirus, he instead caused consternation.

Announcing the drastic measure of halting all travel from Europe, where the virus is running rampant, Trump added that the ban would include "the tremendous amount of trade and cargo."

And "various other things."

If Americans watching television might have been confused, investors were in shock.

The White House quickly issued a clarification that no, trade was not being halted between the European Union and the United States. But the damage was done.

Less than 12 hours later, on Thursday morning, trading had to be stopped when the Dow Jones plummeted seven percent, mirroring 10 percent falls in European markets.

Many had been expecting or hoping for a promise of American leadership around the world and a detailed plan for mitigating the growing economic pain back home.

Trump did announce efforts to boost small business loans and give tax relief, but Congress is squabbling over the details and Trump has so far refused to talk to the Democratic leadership in the House of Representatives.

And when it came to the US role in the world during this truly global phenomenon, Trump again reverted to campaign rally mode.

He labelled it a "foreign" virus, noted how it had begun in China, and blamed Europe for not halting the spread.

"As a result, a large number of new clusters in the United States were seeded by travelers from Europe," he said.

He has built his presidency on pushing a wall for the Mexican border, tariffs to secure better US trade deals and overall promoting the concept of "America first" -- at all costs.

"America First is a dangerously short-sighted response to a global crisis," he tweeted.

Also, what Trump did not explain in his speech was that only European countries in the EU Schengen visa-free area are on the list. He said it wouldn't include Britain, but this also means that 22 other non-Schengen countries are exempted.

Questions were immediately raised over how this would prevent spreading of a visa already present in the United States.

And why would travelers from Britain, for example, be any less likely to be infected?

There are 459 confirmed coronavirus cases in Britain, including Nadine Dorries, the British government's own health minister in charge of patient safety.

As Politico noted drily, there was another "convenient side effect" to Trump's partial travel ban.

"They exempt nations where three Trump-owned golf resorts are located."