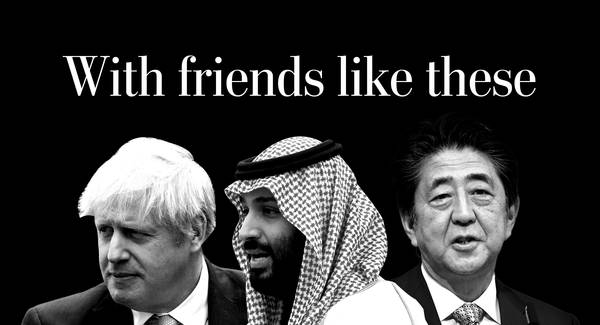 The Trump administration has had a rough few weeks, but spare a thought for the president’s closet foreign allies. From Britain to Australia, Japan to Saudi Arabia, foreign leaders who decided to gamble on America’s unpredictable leader are probably wondering whether they made a losing bet.

In the United States, the ongoing scandal about President Trump’s July phone call with Ukrainian President Volodymyr Zelensky sparked a swell of momentum for impeachment. Democrats argue that the phone call, in which Trump said Zelensky should open a criminal investigation against the son of one of his rivals, amounted to an abuse of office.

But there was more than one world leader on that phone call. Some critics in Ukraine have condemned Zelensky’s attempts to placate Trump during the conversation. “Now we’re a part of American elections, and I don’t like it,” Oleksiy Honcharenko, a member of former president Petro Poroshenko’s party, told The Washington Post. “Ukraine has problems enough without this.”

Zelensky, who like Trump is a political novice who made his name on a television show, appears to be weathering the criticism so far. But the scandal over Trump’s private conversation with Zelensky has sparked further scrutiny of interactions between the Trump administration and other Trump-friendly foreign allies.

U.S. Attorney General William P. Barr has been pressing foreign allies such as Britain, Australia and Italy for information that could discredit U.S. intelligence agencies’ examination of possible connections between Russia and members of the Trump campaign during the 2016 election.

There have been reports that Trump pushed British Prime Minister Boris Johnson and Australian Prime Minister Scott Morrison for information. Johnson and Morrison had endeavored to maintain good relations with Trump, but in both countries, the American president is an unpopular figure. According to Pew, last year just 32 percent of Australians and 28 percent of Britons said they had confidence in Trump.

Appearing subservient to such an unpopular figure carries real political risk for any foreign ally — particularly in Britain, Australia and Italy, where the governments are already struggling with their own instability and questions of legitimacy.

It isn’t just the foreign travels of Barr and Trump’s personal lawyer Rudolph W. Giuliani that should worry foreign allies. The president’s abrupt policy reversals and tendency to alternate between flattery and threats have recently left some allies wondering when their own luck would run out.

Saudi Arabia and the United Arab Emirates, two of the Trump administration’s earliest and most enthusiastic foreign supporters, have found themselves caught between the U.S. president’s willingness to risk a conflict with Iran and his eagerness for a summit with Iranian President Hassan Rouhani.

In an interview with CBS News’s “60 Minutes,” Mohammed bin Salman, Saudi Arabia’s powerful young crown prince, recently edged away from support for a military confrontation with Iran; an Iranian government spokesman said Monday that Saudi Arabia had sent messages to Iran’s president through the leader of another country. These moves follow the UAE’s decision to pull back from the war in Yemen, where it fights the Iranian-backed Houthis.

Both Riyadh and Abu Dhabi courted the Trump administration with geopolitical support and U.S.-friendly business arrangements, but when push came to shove — such as in the case of the attack on Saudi oil facilities last month — it became clear that they have far more to lose than the United States in the dispute with Iran.

A similar situation is playing out farther east, where South Korea and Japan are both simultaneously disappointed with Trump’s negotiations with North Korea — albeit for opposite reasons. A ballistic-missile launch by North Korea on Wednesday, possibly from a submarine, could only heighten a sense of worry for both nations, with Washington-Pyongyang talks expected to resume this weekend.

Japanese Prime Minister Shinzo Abe has been pushing Trump to maintain a hard-line approach to North Korea, with little success. North Korea is still testing missiles, and Wednesday’s launch fell into Japan’s exclusive economic zone. South Korean President Moon Jae-in had pushed for talks, but the seemingly intractable dispute over U.S. sanctions and North Korean denuclearization, combined with his country’s own national security concerns, has helped cut his approval rating in half.

Even Israeli Prime Minister Benjamin Netanyahu, as Trumpian a Trump ally as there ever was, has found that the American leader’s friendship may be fleeting. Netanyahu has watched Trump’s outreach to Iran with unease and, as his own domestic political pressures mounted, seen Trump distance himself from him. “Our relations are with Israel, so we’ll see what happens,” Trump told reporters last month after Israel’s close election result.

You can’t blame foreign nations for trying to ally themselves with Trump. The United States remains the most powerful country in the world. One way or another, all world leaders have to deal with the president, and it makes sense to try to do it while on friendly terms.

Taking a confrontational stance can hurt, too: Trump is likely to hit the European Union, a frequent target of Trump’s ire, with tariffs on up to $7.5 billion of E.U. exports annually after a World Trade Organization ruling Wednesday. Foreign leaders who have stood up to Trump, such as Canadian Prime Minister Justin Trudeau, French President Emmanuel Macron and German Chancellor Angela Merkel, are suffering their own domestic problems anyway.

Some rivals to the United States have ultimately given up on engagement with the Trump administration. Russian Foreign Ministry spokeswoman Maria Zakharova said over the weekend that the release of the rough transcript of Trump’s confidential conversation with Zelensky showed the risks of talks with the United States.

China, a foreign-policy foe that recently moved to a policy of waiting out the Trump administration rather than trying to engage with it, may end up one of the winners of the scandals engulfing Trump. Analysts say the impeachment pressure on Trump could prompt him to accept an “imperfect deal,” according to a report by Hussein Sayed of the foreign exchange brokerage FXTM.

Beijing wagered that Trump would end his first term in a state of weakness. That’s looking like a wiser bet with each day.
Posted by Oscar Bartoli