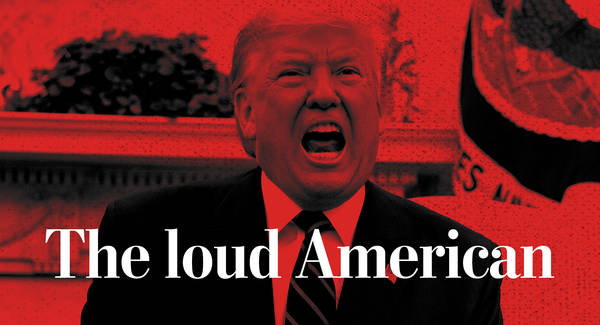 President Trump is cornered and lashing out. Just this week, he has demanded the arrest of political rivals, raged about a “coup” against him and kept firing his incessant fusillades at the “corrupt” and “fake” press. Trump sees the impending congressional impeachment inquiry as a “hoax”; most sober analysts believe House Democrats now have a clear-cut case to prove the president’s abuse of power, as evidence of Trump seeking to pressure a foreign government into giving him dirt on a domestic opponent keeps piling up. On Thursday, in front of cameras and reporters on the White House lawn, he openly called on governments in Ukraine and China to investigate former vice president Joe Biden and his family.

But Trump may hope the atmospherics of the showdown — rather than the facts — are still in his favor. Backed by the United States’ right-wing media, Trump intends to hunker down in America’s polarized battlefield and fight for his survival, even if that means dragging the country’s institutions into the morass. The bulk of Republican politicians remain too afraid to turn against him, while administration officials and federal bureaucrats see their personal fate tethered to his moods.

“The implicit day-to-day charge for many Trump advisers is simple,” reported my colleagues at the White House. “Figure out how to handle or even polish Trump’s whims and statements, but do not have any illusion that you can temper his relentless personality, heavy consumption of cable news or thirst for political combat.”

Trump’s disregard for long-standing norms leaves U.S. politics in a somewhat unfamiliar place. “Authoritarian regimes have this problem all the time … when all government activity is the product of the id of the leader,” Timothy Naftali, a historian and former director of the Richard Nixon Presidential Library and Museum, told my colleagues. “But in a republic, that’s unusual.”

If there is central theme to the age of Trump, it’s precisely that: What was unusual in sophisticated republican democracies is becoming increasingly commonplace. And not just in the United States. The impeachment saga convulsing Washington — where an embattled leader is calling into question the very legitimacy of those opponents challenging his conduct — has, to a certain extent, analogues elsewhere.

In Israel, Prime Minister Benjamin Netanyahu, a close Trump ally, complained of a “witch hunt” launched by his rivals as the country’s attorney general pursues possible corruption charges against him. In Britain, Prime Minister Boris Johnson — who came to power this year via the votes of a fraction of a fraction of the British public — smeared members of Parliament thwarting Brexit as agents of “surrender” and “betrayal.” In India, the world’s biggest democracy, the country’s Hindu nationalist leaders routinely cast their rivals as “anti-national” liberals who ought to move to Pakistan.

On both sides of the pond, talk of “deep state” conspiracy theories is rife, often with an all-too-familiar undertone. Donald Trump Jr., the president’s son, laid the impeachment inquiry at the feet of Jewish financier George Soros — whose support of liberal causes over the years has made him a frequent target of anti-Semites and nativists. On Thursday, Jacob Rees-Mogg, an influential Brexiteer and current leader of the House of Commons, conspiratorially cited Soros as a supposed enemy of Brexit and backer of its British opponents. The remarks led to calls from Jewish politicians in Britain for Rees-Mogg to resign.

There are immediate consequences to such demagoguery, not least in the form of far-right terrorist attacks and violence carried out by people inflamed by this sort of rhetoric. But there’s also a long-term toll, one that’s more imperceptible, yet no less corrosive, to the body politic. It’s the kind of erosion on display in places such as Hungary, Poland and Turkey, where majoritarian, nationalist politicians have steadily undermined democratic institutions and the liberal norms they’re supposed to uphold.

“The death of democracy is now typically administered in a thousand cuts,” wrote the Stanford political scientist Larry Diamond earlier this year. “In one country after another, elected leaders have gradually attacked the deep tissues of democracy — the independence of the courts, the business community, the media, civil society, universities and sensitive state institutions like the civil service, the intelligence agencies and the police.”

You don’t need to look further than Trump’s Twitter timeline. The president has lambasted any federal agency, independent civic institution or media organization he sees working against him, even when their employees can only be accused of doing the job they are supposed to do. State-appointed judges are either his judges or enemies. Journalists who say nice things about Trump are good; those who don’t are “fake.” Law enforcement officials posing next to Trump along the southern border are heroes, but those investigating Trump’s campaign or using internal channels to voice their alarm over his dealings are traitors.

Diamond placed Trump at the center of “America’s own political decay” and observed how the president’s excusing of “a grim list of dictators” abroad and embrace of nativist politics at home had “shaken the post-World War II liberal order.” He also blamed political cynicism on both sides of the aisle, “calcified systems that don’t deliver public goods and complacent citizens who cannot bestir themselves to vote.”

As myriad analysts have already argued, Trump is not a sui generis figure, but a symptom of American politics and, in particular, of the radicalization of the American right. “The GOP has become an insurgent outlier in American politics,” wrote political scientists Thomas E. Mann and Norman J. Ornstein in a prescient piece long ago in 2012. “It is ideologically extreme; scornful of compromise; unmoved by conventional understanding of facts, evidence and science; and dismissive of the legitimacy of its political opposition.”

The uproar over impeachment may only underscore these hard-line positions. It gives Trump the fuel to drive an angry, resentful reelection campaign, and it reveals the frailties of an American system bound together by fraying civic understandings and aging conventions.

“What makes Trump dangerous is that he exposes parts of liberal democracies that were only shadowily visible up until now,” said Peter Sloterdijk, celebrity German philosopher and frequent critic of the left, in an interview with the New Yorker last year in which he spoke of the American president as a “degenerate sheriff,” happy to flout the rules of the state he leads. “In democracies, there is always an oligarchic element, but Trump makes it extremely, comically visible.”