There is a second whistleblower. 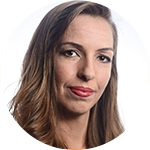 There is a second whistleblower. That was the biggest development over the weekend in the impeachment inquiry.

We don’t know who this person is, other than that they are in the intelligence community, like the first one. And we don’t know what this person is alleging. But one of this person’s attorneys says he or she has firsthand information. That’s important, because President Trump and his allies have tried to discredit the first whistleblower, who said the report was based on what other officials relayed.

The first whistleblower’s report is turning out to be what we would call in journalism very solid reporting. That is, as we learn more, the major allegations in it have been backed up. The Post’s Rosalind Helderman looks at how in may cases, the White House even corroborated the whistleblower’s allegations. Like:

1. The whistleblower reported the July call with Trump and the Ukrainian president accurately despite not being there. We know this because the White House itself released the rough transcript of the call.

2. This person alleged that the White House hid that transcript in a supersecret, code-word-only electronic system, which is not the normal protocol for these calls. The White House confirmed that’s where the call was stored.

3. This person alleged that Trump’s personal lawyer was traveling around, trying to get Ukrainian officials to investigate unsubstantiated allegations about former vice president Joe Biden and his son, and Democrats in 2016. Trump’s lawyer, Rudolph Giuliani, confirmed to The Post he told the Ukrainians: “Your country owes it to us and to your country to find out what really happened.”

The second whistleblower could corroborate even more by being in the places that mattered.
What do Republicans do with all this? 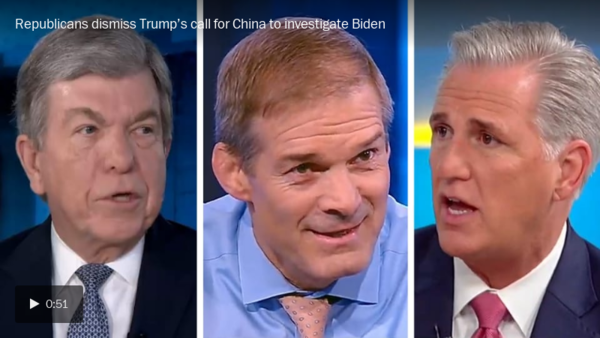 Most are defending the president, but there are breaks in the Republican Party — enough for me to create a list of factions. Here’s the gist of where the party stands right now:

The all-in Trumpers: This group includes powerful Republicans like Senate Majority Leader Mitch McConnell (R-Ky.), who would be the guiding hand for a trial in the Senate if the House impeaches Trump.

The silent majority: Most Republicans are just laying low, unsure if this is going to get better or worse for Trump — and unwilling to share what they really think publicly.

The kind-of critics: About half a dozen House Republicans have either criticized Trump or said they’re okay with the House doing some sort of inquiry into the events alleged into the complaint, just to see where the facts lead.

The lone critic: That’s Sen. Mitt Romney (R-Utah), who stands out by saying things like this: 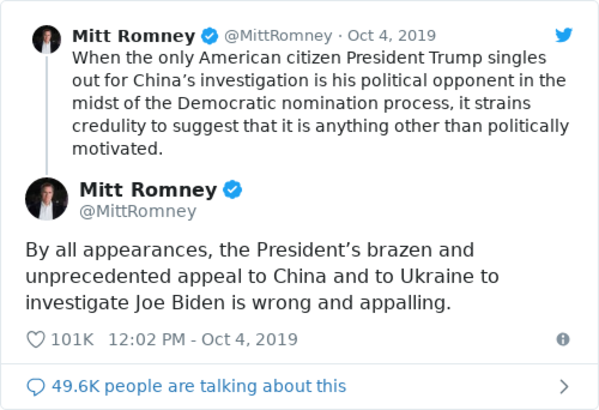 Impeachment fact of the day

Trump has retaliated against Romney by demanding that he, along with House Democrats, be impeached.

But today I learned that members of Congress can’t be impeached. They can be expelled by their own party.
More of your impeachment questions, answered 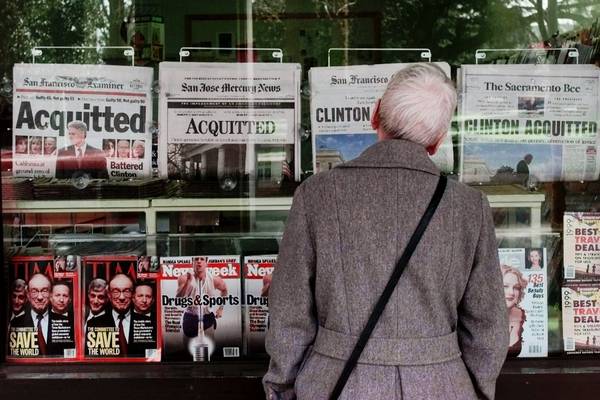 Q: On the Senate trial: Do you think this will be done in public?

Yup. It will be an extremely public spectacle, with Chief Justice John G. Roberts Jr. (whose actual title is Chief Justice of the United States) presiding as a judge in a courtroom might. McConnell gets to set the parameters of the trial, like how long it goes, and other details. But he probably can’t change one thing: that the vote is public. CNN has a good look back on how the trial in the Senate worked for President Bill Clinton.

Q: On all the subpoenas: Can the White House continue to ignore Congress’s requests even though there’s an impeachment inquiry?

Sure; they have until now. In fact, as I was writing this, two people who worked with Giuliani on Ukraine told Congress they won’t be providing documents by the deadline Congress gave them. But when Congress inevitably takes people to court for not producing documents or coming to testify, their case could be strengthened by the fact that lawmakers are conducting a legal proceeding by investigating impeachment and thus have a need for the underlying documents. What that means for specific documents, like a potential fuller transcript of the Ukraine call, remains to be seen.

Q: Could Trump be impeached for obstructing Congress?

Yes. That’s something Democrats are openly considering, given how unwilling the Trump administration is to hand over documents as they investigate other potential reasons to impeach Trump. Obstruction was an article of impeachment against President Richard M. Nixon. They’re also talking about fining or even jailing people who don’t comply with subpoenas.

Q: Can and should Joe Biden file civil lawsuits against Rudolph W. Giuliani for slander and libel? Damage has clearly been done to the Bidens’ reputation.

This is an interesting question in part because Biden might have a case to make even though he’s a public figure and would have to demonstrate actual malice on Team Trump’s part. But suing his political opponent risks looking petty. Instead, after some criticism from Democrats, Biden is campaigning more forcefully against Trump. “Trump won’t destroy me, and he won’t destroy my family,” he wrote in an op-ed published in The Washington Post on Monday, in a preview of what could be to come for Biden on the campaign trail.

Keep your questions coming! And join me Tuesday from 12-1 Eastern for a live chat about impeachment and anything else that’s on your mind in the world of politics.
Posted by Oscar Bartoli