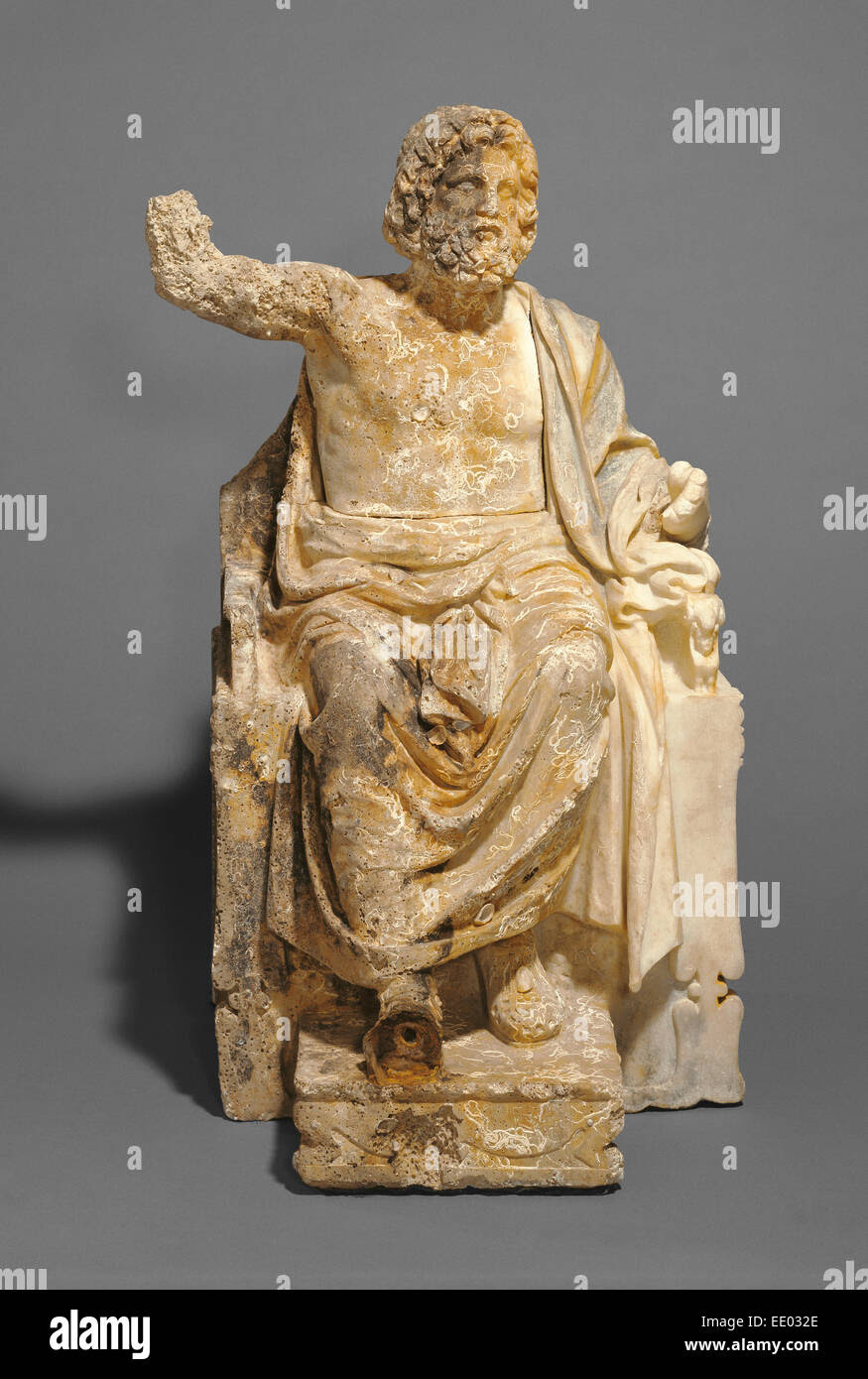 THE J. PAUL GETTY MUSEUM AND ITALIAN OFFICIALS ANNOUNCE AGREEMENT TO RETURN FIRST CENTURY B.C. SCULPTURE TO ITALY
LOS ANGELES – The J. Paul Getty Museum announced today the voluntary return of a marble statuette representing the god Zeus which dates to about 100 B.C. The Museum acquired the sculpture in 1992.   The Museum made its decision to return the Statue of Zeus Enthroned, a 29-inch high marble statuette, following thorough consideration of information provided by Italian officials, including a recently discovered fragment of the statue.  The sculpture may originally have served as a cult statue in a private shrine of a wealthy Greek or Roman home.  It appears to have spent a long period of time submerged in the sea and is partly covered in heavy marine incrustations.   “The Getty values greatly its relationships with Italian colleagues in museums and other cultural sectors,” said Timothy Potts, director of the J. Paul Getty Museum. “The decision to return this object continues our practice of working with the Ministry to resolve issues of provenance and ownership of works in our collection in a way that responds to new information as it emerges, and respects the good faith and cultural missions of both parties.”  Statue of Zeus Enthroned, artist unknown, Greek, about 100 B.C. Marble, 74 × 46 × 45.6 cm (29 1/8 × 18 1/8 × 17 15/16 in.)
-
“We are pleased to work with the Getty to return this fascinating object to the Italian people,” said Dario Franceschini, Italian Culture Minister. Added Nunzio Fragliasso, Naples public prosecutor, “On behalf of the del Museo Archeologico Nazionale di Napoli, we are delighted to bring Zeus Enthroned home to share with the Italian people and visitors from all over the world who come to learn about Italian history and culture.”  The ancient sculpture was returned to Italian authorities today at the Getty Center under the supervision of the Italian Consul General for Los Angeles, Antonio Verde, and with the invaluable cooperation of Armando Varricchio, Italy’s Ambassador to the United States. “The return of the Statue of Zeus Enthroned is a vivid demonstration of the superb cooperation between the United States and Italy and our cultural institutions,” said Ambassador Varricchio. “It falls within the framework of the bilateral Memorandum of Understanding between Italy and the US, renewed in 2016 for the third time, and underscores our common unwavering commitment to the protection of cultural heritage.”  Consul General Verde complimented the Getty’s decision to return the object, saying “It is wonderful that the Getty has such a positive working relationship with Italy, both for issues like this one that involve the repatriation of works of art and for special exhibitions and loans which display Italian masterpieces at the Museum.”